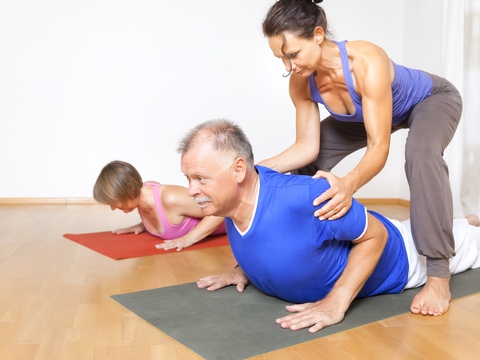 Men need yoga as much as their female counterparts and they are finding that it gives them many benefits beyond just physical strength.  Here are 5 reasons why men are joining the revolution.

Yoga in the West has been pre-dominantly been female biased, yet over the past few years’ millions of men worldwide have taken up yoga.

Perhaps men have been put off in the past by the perceived emphasis on the 'touchy, feely, chanty' aspect of yoga that was usually attended by groups of flexible women. Yet looking back hundreds, if not thousands of years, traditionally yoga was dominated by men and only its transition to the West has cultivated this change in perception that is a female dominated practice.   Yet this is changing.

Today we see more and more men getting involved in yoga to cope with modern day pressures.  Yoga has also transcended into the professional sports arena with the German National Football team and several NFL (USA) football teams employing full time yoga instructors.  We are also seeing men’s lifestyle magazines and blogs, such as Mensfitness.com and bodybuilding.com, advocate the practice of yoga to 'hone your mental focus, rid your system of toxins, and maybe even boost your performance in the bedroom'.   They also suggest that it may be 'the best decision you (men) ever made for your muscles and overall athletic development'.

Yoga should not be seen as another sport, primarily as yoga philosophy is focused on avoidance of the ego and included non-harming to yourself and others.  Also the physical aspect of the practice, known as Asana, is only one limb of the eight limbs of yoga*. Although as sport becomes more competitive and margins to win or lose become narrower, sports are turning to this ancient philosophy the help with aspects of the mind, not just the body, to help athletes compete.

These days, in the West, there are no prerequisites to practising yoga. You don’t have to give up eating meat, drinking alcohol or smoking, you can just go to a shiny gym and you can find yoga teacher or like Yogic Frog, some teachers are now coming into business to support employees manage mental and physical health during the working day.  There are many disciplines of yoga from Power Yoga, Hot Yoga, Vinyasa Yoga to Yin yoga and a myriad in-between. Though to enable you to miss that Cardio session, you should aim at classes that have 'Power’, 'Flow' or 'Vinyasa; in the title.

So why should men do yoga, if you aren’t convinced already:

Yoga uses your own body weight to build muscle mass and strength. Just think of how much effort it takes to bench press your own body weight in the gym!   mensfittness.com suggests that yoga gives you the 'equivalent muscle-building benefits by performing long, extended pushups, squats, and leg lifts'. 'The results are well-worked muscle groups, which get stronger with each class'.

Yoga asana (movements) is a series of holds, twists and movements for the muscles, joints, spine and ligaments.   This can improve your performance in other sports and promotes good digestion.

3. Relieve stress and calm the mind.

People deal with stress in different ways.  Yoga is a great way to unplug yourself from your mobile, laptop or any external electrical device and give the brain the time to reorganise, recharge and unwind.

Most yoga teachers always start a yoga class with a reminder to you to understand where the body is at on that particular day and to let the ego leave the room and this that desire to over extend and damage yourself. This basic ability to scan, observe and manage the bodies systems with help prevent injury as well as prevent any further injury which may cause lasting damage.

5. Have better sex.**
One way to improve your performance in the bedroom is to translate all those relaxation and breathing techniques from yoga class into better, longer sex. Yogi Cameron says these strengthened concentration skills will help you focus your mind and better channel your sexual energy, helping to prevent premature ejaculation. “This can lead to increased sexual endurance,” he says, “and will make you far more sensitive and responsive to your partner.” **

If you are going to join the revolution, then it couldn’t be easier. Grab a mat, wear something that gives you free movement and doesn’t show of your assets and sign up at your local gym or studio.